Spotlight of the Month Start a Business Soon

Incfile’s #INCspiration Founder Story series is a monthly feature on our blog where we spotlight the real-life stories of actual Incfile clients. These are the stories of active, successful entrepreneurs who used Incfile’s business formation services to create the legal business entity for their companies and to officially start their businesses.


But did you know that some entrepreneurs use Incfile’s services to start a nonprofit organization? If you have a charitable cause that you want to support or a mission-oriented change that you want to create in the world, Incfile can help with that too. This month we’re featuring the story of two courageous and inspiring entrepreneurs, Robby and Sabrina Sullivan. They created a nonprofit organization, Callen’s Cause, dedicated to someone who was very dear to their hearts: their son Callen, a beautiful baby boy who tragically died in April 2017 from Sudden Infant Death Syndrome (SIDS).

Callen’s Cause is a registered 501(c)(3) nonprofit organization based in the D.C. Metro area with a mission to raise money for SIDS research. If you want to support a great cause and help fund cutting-edge research that will hopefully help bring an end to SIDS, consider donating to Callen’s Cause.

Learn more about the story of Robby and Sabrina Sullivan, and how founding Callen’s Cause has helped to build a legacy for their wonderful son’s brief but powerful life.

Creating Something New After Unimaginable Loss

No parent should have to experience the loss of a child. In 2017, Robby and Sabrina were raising a baby boy named Callen, who seemed perfectly healthy, happy and even ahead of schedule for his developmental milestones. He was a cuddly, perfect little boy. They nicknamed him “Baby Genius” and “Gummy Bear” for his contagious, toothless smile.

Tragically, on April 2, 2017, Callen died of SIDS - Sudden Infant Death Syndrome. This condition is heartbreaking and painful for families to go through, in part because it happens without any warning. SIDS is a rare and somewhat mysterious medical problem; scientists have not always been able to offer clear guidance to parents on what causes SIDS and how it can be prevented. 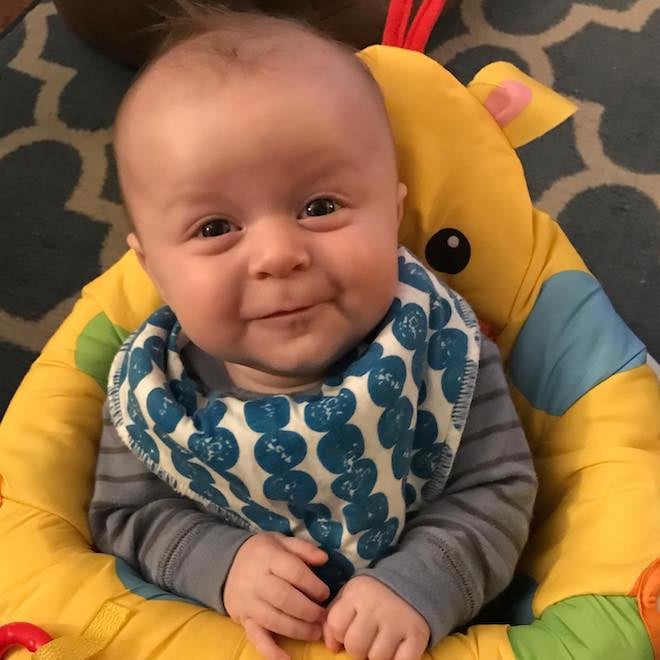 But out of this tragic loss, Robby and Sabrina decided to create something new to keep the memory of Callen alive and provide help and support for other families. “Almost immediately it became our mission to keep Callen present every day, to take on what we believed his destiny to be in changing the world for the better and to identify ways to prevent other families from experiencing similar heartbreak,” Robby Sullivan said. “We believe founding Callen's Cause helped to achieve all three.”

Robby and Sabrina are hoping to change the world with Callen’s Cause by raising money for SIDS research that is going on now at Boston Children’s Hospital. Scientists are working to uncover possible connections between underlying medical conditions and factors that might cause SIDS, so that someday SIDS can be prevented, treated and cured.

Building Community Around Callen’s Cause

Robby and Sabrina have used Callen’s Cause to raise money for SIDS research in several ways, such as fun runs, golf events, toy drives and corporate sponsorships. They are also involved with support groups and organizations to help families affected by SIDS, infant death, stillbirth and early pregnancy loss.

Losing a child can sometimes cause people to feel isolated. Organizations like Callen’s Cause try to help grieving people by building a supportive circle of community so that they are never alone. “Callen's Cause has allowed us to make a difference. Those who know we're helping are grateful and hopefully those that aren't impacted by this terrible syndrome never have to feel that pain of a life cut way too short,” Robby said. “Selfishly, as Callen's parents, it is also beautiful to hear others say his name so often.”

Robby and Sabrina decided to start a nonprofit organization for SIDS research soon after losing Callen. Especially in the early stages of grieving such a life-changing loss, they knew that they needed some extra help and support to get their new nonprofit launched and running.

“We felt an urgency to take action in establishing our foundation but were also very early in the grieving process,” Robby said. “It became apparent to us that we needed help to take some of the heavy lifting off our plates, and Incfile fit the bill beautifully with their experience in the space. To have experts ease us through the regulatory processes has been immensely helpful.”

When you sign up for Incfile’s business formation services, you don’t have to go it alone; you get expert guidance from Incfile on how to navigate the process of filing paperwork and meeting the state-specific requirements to start your business. One of the most important skills that new entrepreneurs or nonprofit founders need to learn is how to delegate — anything that you can outsource can help you save time, conserve your energy and stay focused on your higher-level mission and goals. Incfile helps entrepreneurs by giving them a little extra support and momentum to make their new business idea official, without having to fill out all the paperwork and deal with the bureaucracy by themselves.

Adapting to Challenges of the Pandemic

The pandemic year of 2020 was a massive disruption to businesses and nonprofit organizations of all sizes, and it also brought new challenges to Callen’s Cause. Before 2020, Robby and Sabrina had mostly used in-person fundraising events to raise money for SIDS research, but the pandemic made this more complicated. They were able to adapt by offering virtual fun runs and outdoor activities, but hopefully, the nearing end of the pandemic will make it easier for organizations like theirs to host in-person fundraising events again.

Robby and Sabrina have also been learning more about the marketing side of running a nonprofit — how to generate interest and engagement from donors and stakeholders. “It’s important to level set your expectations about consumer/customer/advocate response and engagement,” Robby said.

Callen’s Cause has also adapted to the economic challenges of the pandemic. Robby and Sabrina have helped support the foundation with their own personal funds so that it can run with zero overhead costs. “As a nonprofit, our engagement is tied around fundraising and that is greatly impacted by economic trends and availability of discretionary income,” Robby said. “A goal of ours was to run at zero overhead, which requires personal investments from us to support. During times of economic downturns such as the recent pandemic, that personal investment has increased to supplement lower participation and lost fundraising.”

Robby and Sabrina Sullivan are doing something truly inspiring: they are continuing the legacy of their child Callen to help him make a bigger difference in the world. Anyone who has suffered from SIDS, infant loss or the loss of a child can hopefully find comfort in community like the one created by Callen’s Cause.

Best wishes to Callen’s Cause and the brilliant researchers that you support; we hope that 2021 is your most successful year of fundraising yet!

Ben Gran is a freelance writer from Des Moines, Iowa. Ben has written for Fortune 500 companies, the Governor of Iowa (who now serves as U.S. Secretary of Agriculture), the U.S. Secretary of the Navy, and many corporate clients. He writes about entrepreneurship, technology, food and other areas of great personal interest.